One of the most iconic fighter/interceptors of the Cold War era, the MiG-25 Foxbat which entered service in the Soviet Armed Forces in 1970 was the first in a new generation of heavyweight combat jets which could fly much higher and faster, carry higher weapons payloads and employ larger more powerful radars than their medium and lightweight counterparts. The Foxbat’s advanced capabilities demonstrated in multiple theatres spurred the United States to further increase the specifications of its next generation of combat jets, most notably the F-15 Eagle fighter which was built largely with tackling the MiGs in mind, although in their last engagement in 1991 the Foxbat proved capable of neutralising an Eagle for no losses. While the MiG-25’s speed and altitude ceiling remain without peer among manned combat aircraft, its endurance has long been in question with a number of Western sources, such as British journalist Bill Sweetman, having claimed that, despite its size, it remained a short ranged jet with a combat radius of only around 250km. With the Foxbat’s near invulnerability to Western weaponry in multiple conflicts having been a major embarrassment, which made highlighting such a major weakness in the design somewhat satisfying, an assessment of the Foxbat’s performance shows multiple cases where the aircraft demonstrated a far longer combat radius around 500% as great as that which its detractors claimed.

Perhaps the clearest demonstration of the Foxbat’s endurance came in mid-1975, when a Soviet Air Force MiG-25RB reconnaissance aircraft operating from Poland was deployed to monitor NATO activities. The aircraft flew at an altitude of over 27,400 metres, placing it in space and very far above the reach of Western fighters, and at a sustained Mach 2.8 speed to reach Northern European ports on the Atlantic Ocean. These are thought to have been its primary targets. NATO ground based radars which tracked the aircraft provided data which led to the conclusion that the Foxbat has an operational radius of at least 1200km at sustained high supersonic Mach 2.8 speeds.

The inability of Western anti aircraft assets to seriously threaten the MiG-25 had been demonstrated by the performances of reconnaissance variants of the Foxbat three years prior, when deployed against even more densely defended airspace in Israel and the Israeli-held Sinai Peninsula. Mach 2.8 was a standard operating speed for the Foxbat, and while it could fly 14 percent faster at Mach 3.2 which it had done at times to avoid close call missile attacks, this took a significant toll on its engines which would afterwards require refurbishment. Investments were made in the 1980s in developing an enhanced MiG-25 variant which could sustain Mach 3.2 speeds, with the program reaching advanced prototype stages, although the aircraft was ultimately cancelled due to the Soviet Military’s focus on the newer more capable MiG-31 interceptor and its successors the MiG-31M and MiG 701. 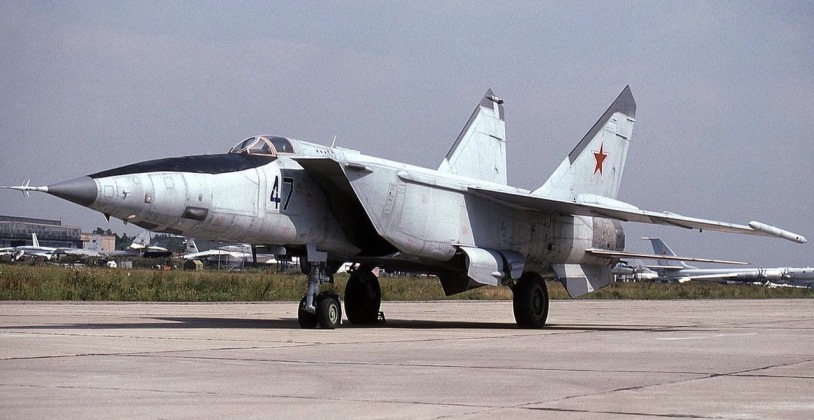 Other notable examples of the MiG-25’s range being demonstrated included its first combat deployment from 1971, when Foxbats were deployed to facilities in Egypt to overfly Israel for reconnaissance and proved comfortably capable of reaching their targets. In Indian service the aircraft in the 1980s MiG-25s flew deep into Pakistani airspace where they were similarly all but invulnerable and could even create sonic booms over Islamabad in the knowledge that Pakistan’s F-16s could never reach them. Also that decade Iraqi MiG-25s configured as bombers were widely deployed for strategic attacks on Iranian cities. Although Iran’s F-14 fighters with their long range AIM-54 missiles had left Iraq’s Tu-16 and Tu-22 bombers near useless, and its Su-22 strike fighters highly vulnerable, the MiG-25 could consistently bypass Iranian defences to engage even the best defended targets.

Algerian MiG-25s, too, frequently flew by Moroccan and Spanish positions deploying deep into the Mediterranean and near the Atlantic, with their effective invulnerability reportedly being a key factor in Spain’s decision to acquire F-18 fighters to counter them. Had the MiG-25 been a short ranged aircraft it would have been far from suitable either for defending the vast territories of states such as the Soviet Union or Algeria, or for reconnaissance roles, with such claims sharply contradicting the aircraft’s operational record and the very high endurances for its time which it demonstrated. The last MiG-25s were withdrawn from the Russian Air Force in 2013, with the aircraft succeeded by the even longer ranged MiG-31 Foxhounds which have endurances comfortably exceeding those of any Western fighter or interceptor class.