Entering service from 1970, the MiG-23 Flogger variable swept wing fighter remained in production in the Soviet Union in 1985 and was the country’s first fighter jet with third generation capabilities. The aircraft was in many ways ahead of its time, with an engine which surpassed that of the American F-14A fourth generation fighter in thrust and closely rivalled those of the F-15 and F-16 jets, and with a sensor suite which by the mid-late 1970s provided greater situational awareness that of the U.S. Air Force’s F-16A. In terms of flight performance, the fighter had a high thrust to weight ratio and turn rate and, for a single engine fighter, was one of the fastest and highest flying ever built. Later variants of the aircraft proved highly formidable when used by the Cuban Air Force in particular, and impressed their Israeli operators during testing after one was acquired through a Syrian defector. A specialised strike variant of the fighter, the MiG-27, was also developed with advanced precision strike capabilities for air to ground missions, and entered service from 1975. It remained in production in India under license until 1994. Over 6000 MiG-23/27 fighters were built in approximately 25 years, the large majority of them in the first 15 years from 1970, with the Soviet Union placing a great deal of faith in the design’s capabilities and investing accordingly. At the height of its strength the Soviet Air Force fielded approximately 1,400 MiG-23s and over 600 MiG-27s for a total fleet size of around 2000 aircraft. While the MiG-27’s avionics made it a more capable strike platform than most fourth generation designs, the MiG-23 had proven capable in combat in Soviet hands against fourth generation aircraft. A notable example was the reported shootdown of a Pakistani F-16 over Afghanistan in 1987, which was the only time Soviet MiG-23s saw a shooting engagement in the air. Pakistan claimed no losses and that it had shot down its own aircraft by accident. During exercises MiG-23 pilots had also proven capable of tackling the country’s newer MiG-29s so long as they kept to longer ranges. The discrepancy between early and late models of the fighter it was significant, with the most capable MiG-23MLD variants boasting not only entirely new engines, sensors and avionics, but also a very different wing design for much better manoeuvrability.

Despite its high performance, the MiG-23 was retired several years ahead of schedule when the disintegration of the Soviet Union and subsequent very rapid contraction of the Russian economy forced the country to retire the majority of its fighter classes. This included including all fighters other than the MiG-29, Su-27 and Su-24M. The majority of the 800 MiG-29s in service would also be retired, and along with much of the MiG-23 fleet they were placed into reserve storage. These decisions were made as the Russian Air Force invested in a fleet made up primarily of heavyweight Su-27 and Su-27-derived aircraft which was tiny by comparison to that of the USSR. The last MiG-27s were retired in 1997, while a small number of MiG-23s served at training schools into the 2010s. 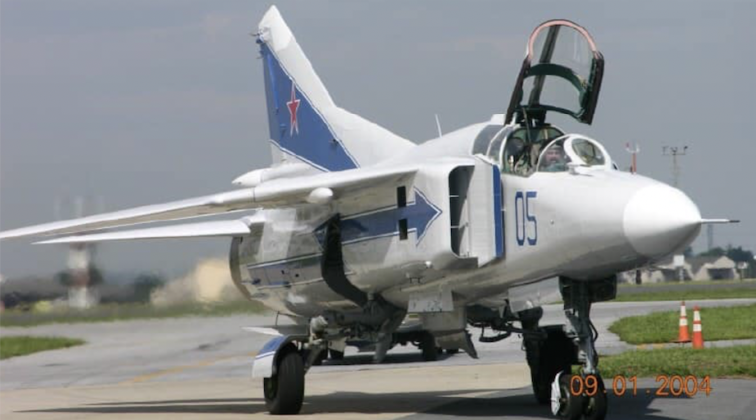 Despite retiring the MiG-23 from its own Air Force Russia continued to explore options for modernising the aircraft and developing more capable variants in order to both provide upgrade packages to foreign operators and potentially to even sell its own surpluses on. Belarus notably managed to do so in the 2000s selling from reserves several units of its MiG-23MLDs, the most advanced air superiority variant, to Syria. One of the most notable areas of improvement in Russia was the fighter’s armaments suite which had previously been an outstanding weakness when it had relied on using R-23 and R-24 semi active radar guided air to air missiles that were less capable than the AIM-7E used by U.S. fighters. The R-27 missile which had been developed for the fourth generation MiG-29 and Su-27 fighters was integrated onto the MiG-23’s airframe for testing purposes. The missile had far greater reliability and around double or more the range of the R-23/4, depending on the variant, and according to some reports may have been integrated onto the Angolan Air Force’s MiG-23s to enhance them. More ambitiously still, Russia experimented with integrating the R-77 air to air missile, which was its first with active radar guidance, onto the MiG-23MLD airframe. This had the potential to transform the aircraft into a very dangerous interceptor for long range engagements, with active radar guidance providing ‘fire and forget’ capabilities similar to those the American AIM-120 AMRAAM had provided its F-16s from the 1990s.

Although Russia has reportedly continued to export basic MiG-23 fighters as recently as 2020, with some reportedly sold to the Libyan National Army, it has not found a foreign market for a variant with expensive new features such as the integration of the R-77. Parties willing to pay more for such a fighter have favoured purchasing more modern and higher end aircraft such as the MiG-29. Had there been no MiG-29s on offer, however, the possibility that enhanced MiG-23/27s from Russia’s reserves could have been exported would have been much greater. Russia made what may have been its final effort to offer an enhanced MiG-23/27 abroad in 2007, with it offered a highly ambitious upgrade program for India’s already large fleet of enhanced MiG-27H fighters.

India had continued to assemble MiG-27s under license for nine years after Russia had shut down MiG-23 production lines, providing a fleet of 148 fighters in service by 1995, with the aircraft being purchased alongside MiG-29A jets built for air to air combat. The MiG-27H variant developed for India was the most advanced version of the MiG-23/27 ever to enter service, and benefited from modern avionics including new onboard computers and cockpit displays, a GPS/GLONASS navigation system, a heads up display, a Sextant Ring Laser Gyros, new data links and modern electronic warfare systems. Artificial horizon, altimeter and airspeed indicators were among the other subsystems also integrated. Most significantly, however, the fighters benefitted from a new radar which provided superior situational awareness and allowed for anti shipping and air to air attacks. With these enhancements the MiG-27H’s avionics suite was in many ways more sophisticated than those of the U.S. and USSR’s the early fourth generation designs. 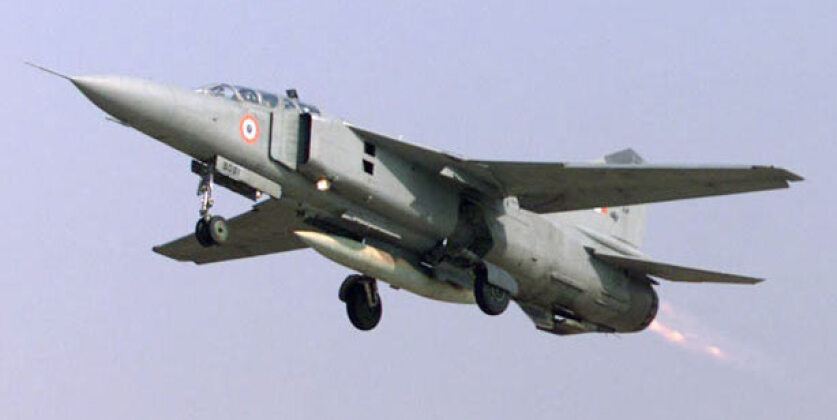 India had shown an interest in acquiring more single engine fighters, which unlike twin engine jets like the MiG-29 or Su-30, generally had lower operational costs that in turn allowed them to be fielded in larger numbers. While post-Soviet Russia had not developed any single engine fighters, it offered a highly ambitious upgrade program for the Indian MiG-27 fleet with some of the proposed enhancements demonstrated on its MiG-27M No. 115 prototype. The most notable change to the design was the replacement of the MiG-27’s R-29B-300 engine with the modern AL-31 – the same engine used by the Su-27 and Su-30 fighters the latter which made up the backbone of the Indian fleet. This would provide important commonality between the MiG-27 and Su-30 fleets and make maintenance easier, while the AL-31’s far greater power, which exceeded that of any Western fourth generation engine, would drastically improve the MiG-27’s flight performance. This in turn would allow the variable swept wing fighter to perform much more capably in an air to air role alongside the air to ground mission it was initially designed for. 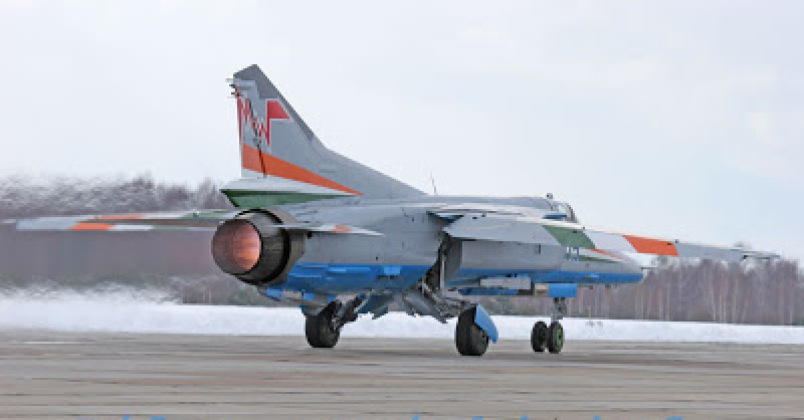 The AL-31FN turbofan on offer was 47 millimetres shorter and its weight is almost 300 kilograms lighter than the R-29B-300 turbojet, while fuel consumption was 17 percent lower. The AL-31 variant used by India’s Su-30MKI was the AL-31FP. Work to develop a variant of the AL-31 for the MiG-23/27 had been ongoing since 2003, indicating Russia may have been planning to offer swept wing fighters with improved engines for export and possibly even to bring some into service in its own fleet. Flight tests of the modernised MiG-27M No. 115 were carried out from December 2007 to February 2008. The enhanced fighter demonstrated the ability to reach angles of attack up to 22 degrees and showed a 22-27% increase to combat efficiency. Russian sources also indicated that a modification to the MiG-27’s air intakes to better accommodate the AL-31 could allow the fighter to supercruise – to sustain supersonic flight without using engine afterburners – which was an important feature of fifth and some ‘4+ generation’ fighters such as the F-22 and Su-35. Very few single engine fighters have yet to achieve this capability today.

With India already having experience assembling the MiG-27, Russia offered to provide support to reopen production lines for a much improved variant of the fighter. Its primary attraction was that it would have been cheaper and less maintenance intensive than the heavier MiG-35 which was also on offer. An option was also included to integrate a version of the Platan sighting system used by the Su-34 strike fighter, which would have aided precision strike capabilities significantly. India ultimately did not invest in further modernisation of the MiG-27, and cancelled the tender for new lightweight fighters entirely to instead further develop its indigenous Tejas fighter and possibly in future to acquire MiG-35s from Russia. Although the MiG-23/27 had considerable potential to incorporate upgrades, the collapse of the Soviet Union and contraction of the Russian economy, combined with the availability of the MiG-29 which was in most cases not prohibitively more expensive, meant that this potential was never exploited beyond various prototypes.