In the late hours of July 6 the LGM-35A Sentinel intercontinental ballistic missile (ICBM) program suffered a significant setback when its Mk 21A ICBM reentry vehicle being tested at Vandenberg Space Force base in California failed just seconds after launch. The LGM-35A program has faced widespread criticisms due to its cost, with proposals made to cancel it entirely and compensate with expansion of the intercontinental range bomber and ballistic missile submarine fleets. It is intended to replace the LGM-30 Minuteman III, which is the world’s oldest ICBM still in service and the only operational Western ground based ICBM. The program is expected to cost close to $270 billion, with such investments having been deferred for decades leading to the Minuteman’s life being extended for over half a century, although the missile’s age means that they will soon need to be retired either without replacement or with the LGM-35A seen through to completion. Where the Minuteman III entered service at a time when only the Soviet Union had an intercontinental range arsenal capable of striking major cities across the United States mainland, China and North Korea since gained such capabilities in the 1980s and 2010s respectively. 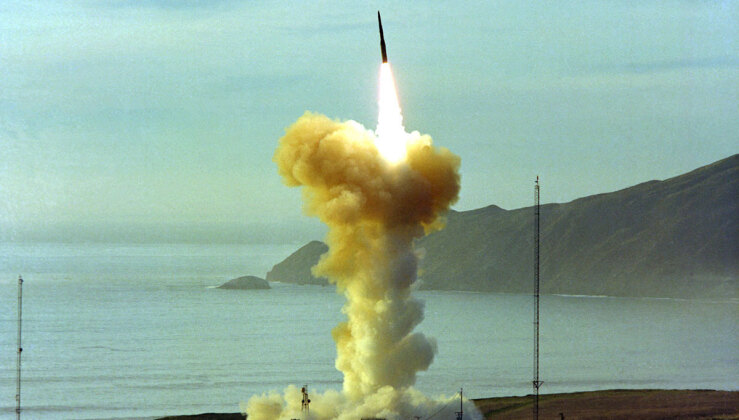 The LGM-35A is expected to be deployed from 2029, and has been underdevelopment jointly by the Air Force Nuclear Weapons Centre and Lockheed Martin since 2019. Issues with the program and questions regarding its feasibility have come amid broader concerns with the capabilities of America’s strategic arsenal. While America’s B-2 bombers continue to suffer from low availability rates and are scheduled to be retired decades ahead of schedule, the B-21 intended to replace both them and the more troubled B-1Bs have seen their first flights repeatedly delayed, raising the possibility that the aircraft’s direct Chinese competitor the H-20 could fly before it. Strategic missile defences have also consistently suffered from underwhelming results in testing, while the new Next Generation Interceptor missile defence system is expected to replace the ageing Ground-based Midcourse Defence (GMD) system by 2021 already showing signs of being unaffordable with a cost of $17.7 billion for just 31 surface to air missiles. This is thought to be insufficient to repel even a full sized North Korean strike let alone one by the Chinese ICBM arsenal. While the future of the LGM-35A, the B-21 and the Next Generation Interceptor all remain uncertain, issues with all three pertaining to cost, performance and schedule have left a considerable possibility that the United States could be left with an underwhelming strategic capability as those of its adversaries modernise quickly. The fact that China, Russia and North Korea have all fielded ballistic missiles with hypersonic glide vehicles, with Chinese strategic hypersonic weapons expected to give it a particularly distinct advantage while American tests continue to struggle, is a further indicator of trends in the field highly unfavourable to American power.