On June 26 Su-30MKI heavyweight fighters from the Indian Air Force were confirmed to have arrived in Egypt to participate in a month long tactical leadership program, with the long range aircraft having flown non stop into Africa while refuelling over the Persian Gulf with support of United Arab Emirates MRTT aircraft. The Air Force announced regarding the program: “It is a unique exercise with air assets in a large force engagement environment, simulating various conflict scenarios. The exercise is aimed at enhancing defence cooperation between the two countries and exchange of best practices.” The choice of the Su-30MKI has important implications for both participants in the exercises, with the aircraft considered the most capable in the Indian Air Force or in South Asia and expected to demonstrate capabilities that could further increase Egyptian interest in acquiring similar fighters. The Egyptian Defence Ministry placed an order in 2018 for an estimated two dozen Su-35S fighters, a design closely related to the Su-35, which have been manufactured in Russia but have yet to be delivered. It has been speculated that Western pressure and threats by the United States to impose economic sanctions could be deterring Egypt from receiving the aircraft, although the contract has yet to be cancelled. 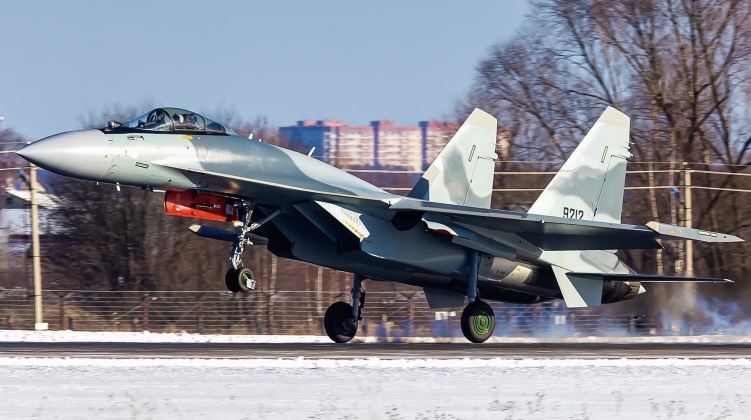 The Su-30MKI and Su-35 are both derivatives of the Su-27 Flanker, which was considered the most capable fighter fielded by any air force during the Cold War era. The Su-30MKI was a special variant of the Su-30, a Su-27 modified for long range interception and multirole operations, with far superior air to air capabilities and several features including thrust vectoring engines derived from the cancelled Su-37 air superiority fighter. The Su-35S also borrows heavily from the Su-37, but is a more expensive higher end design which entered service twelve years later than the Su-30MKI. Where India today fields over 260 Su-30MKI fighters, with further units having been ordered in 2020, the Egyptian Air Force was also expected to eventually place followup orders for Su-35s to expand its fleet. While India fields a robust fleet of fighters for air to air engagements, with all its fighter classes capable of deploying modern beyond visual range active radar guided missiles, very few Egyptian fighters have such missiles or any viability in beyond visual range air to air engagements with the majority carrying only infrared guided missiles. Demonstrating the capabilities of the Su-30MKI in Egypt, and providing further evidence of its considerable superiority over Egyptian Air Force fighters, could incline the Egyptian Defence Ministry to move ahead with receiving its Su-35s and potentially consider greater orders. While the Su-30MKI was manufactured in India, however, whether Egypt would ever pursue a similar agreement for high performance heavyweight fighters remains highly questionable. India and Egypt maintained close defence ties until the 1970s, and were both leading clients for a number of Soviet aircraft such as the MiG-21. Both were among the first to receive Soviet third generation MiG-23 fighters, although while India operated them for decades Egypt’s decision to pivot to the West led it to illegally send the fighters to the United States and China for study – compromising their technologies. India continued to receive the most capable Soviet and Russian aircraft available, ranging from MiG-25 which could fly over Pakistan effectively at will due to their high speeds and altitudes, to the MiG-29 for which it was the first foreign client and the Su-30MKI which was more capable than any fighter in the Russian Air Force at the time. Egypt by contrast received only very low end Western fighters, namely heavily downgraded F-16s without access to any viable standoff range weapons for air to air, anti shipping or air to ground roles – widely termed the worst F-16s ever built. The contrast between the different directions the two formerly similarly inclined governments took continues to be very strongly reflected in the capabilities of their air forces, although a change in government in Egypt from 2013 has been followed by steps by Cairo to reverse its former direction of which the Su-35 order was but one.