Entering service from December 2020, the Russian Su-57 next generation fighter has yet to be fielded at squadron level strength but is expected to see three full units in service by the end of the current State Armaments Plan in 2027. A successor to the ambitious MiG 1.42 program which was cancelled as a result of the Soviet collapse, the Su-57 is a heavyweight stealth aircraft designed to form the backbone of the Russian fleet and likely those of key defence partners such as Algeria and Vietnam. Alongside the Chinese J-20 and American F-35, the aircraft is one of just three post fourth generation fighters in production anywhere in the world, but where foreign designs have largely been oriented towards either air to air or strike missions the Su-57 appears more balanced between the two with no apparent specialisation. The fighter is an outlier among fifth generation designs for a number of reasons, and integrates technologies and emphasises features which its foreign rivals have not making it a very different kind of aircraft. With delays to the program meaning it will need to be able to go head to head not only with F-35s, but also operate in a world dominated by American and Chinese sixth generation fighters currently under development, a growing number of sixth generation technologies have begun testing with the intention of integration onto the Su-57 airframe. Although these have yet to materialise, many of the fighter’s existing features are already outstanding and unrivalled worldwide with the most notable seven of these explored below. Where most fighters including all competing fifth generation designs rely on only a single radar, six are integrated across the Su-57’s airframe which has the potential to provide a significant advantage in situational awareness. The use of multiple radars in such a way was notably pioneered by the preceding Su-35 ‘4++ generation’ fighter which entered service from 2014, and which alongside the Irbis-E passive electronically scanned array radar in its nose integrated two L-band AESA radars in its wing roots for superior electronic warfare capabilities and a better ability to detect stealth targets. Six radars allow the Su-57 not only to track an unmatched 60 targets simultaneously, but also operate in different wave bands which optimise it for electronic warfare and to detect stealth targets at range in much the same way as the Su-35. The radars are distributed across the airframe allowing for the detection of targets from the rear and sides, which mirror’s the Su-35’s own less extreme emphasis on a wide detection angle. While fighters have since the 2010s in particular relied increasingly heavily on sharing data with supporting assets, and Russia’s ability to provide its aircraft with a modern network centric warfare capability up to Chinese or American standards remains in question, fighters’ own sensors still play a central role in combat with the Su-57’s sensor suite expected to provide a strong advantage over existing rivals. The K-77M forms the primary air to air armament of the Su-57, and is a successor to the R-77 that currently equips Russian fourth generation fighters. Boasting a much extended 200km range, the missile’s clipped fins allow it to deploy from internal weapons bays while its nose seeker is one of very few in the world to use an AESA radar for guidance. The K-77M is optimised to engage small and manoeuvrable targets using a nose mounted active phased array antenna (APAA) guidance system – described by Russian state media outlet RT  as follows: “An active phased array antenna consists of a large number of cone-shaped cells installed under a transparent-to-radio-waves cap on the nose of the missile. Each cell receives only a part of the signal, but once digitally processed, the information from all cells is summarised into a ‘full picture,’ enabling the K-77M missile to immediately respond to sharp turns of the target, making interception practically inevitable.” This gets around fighters’ ability to evade missiles’ ‘fields of view’ and providing the Su-57’s missile with likely the longest ‘no escape range’ of any in the world. While the Russian Air Force has previously cut costs and avoided equipping its latest fighters with state of the art air to air missiles, as demonstrated by the Su-35s often carrying old R-27 missiles which lack active radar guidance, the fact that the K-77M is the only long range air to air missile that can fit in the Su-57’s internal bays means there will be little choice but to purchase an adequate number to at least equip all Su-57 units. Much like its predecessor the Su-27 had a much longer range than fighters in Western air forces or than preceding Soviet fighters, and the MiG-31 interceptor developed simultaneously was the world’s first fighter capable of extended supersonic cruise, the Su-57 also has a much longer range than any rival. The fighter’s ability to fly supersonically without using afterburners, reportedly with a speed exceeding Mach 2, also provides the longest supersonic range in the world at over 1500km. Particularly since the end of the Cold War when the size of the Russian Air Force contracted sharply, there has been a strong emphasis on high endurances to allow remaining units  to cover the country’s vast airspace. The loss of military bases overseas, including across Eastern Europe and in Vietnam, has further made high endurances valuable to allow fighters to project power from airbuses in Russia itself – particularly due to the limitations of the Air Force’s aerial refuelling capabilities. The Su-57’s very long range allows fighters to engage targets not only across Europe, but far into the Atlantic, from airbases in western Russia, or to deploy from bases further in which could be safer from possible Western attacks. It also allows fighters to cover much of the Pacific theatre, comfortably placing Japan, Taiwan and Korea within range, to provide support for the Pacific Fleet. Russia’s lack of an aircraft carrier fleet has only made this capability more valuable, and it is expected to be highly prized by potential export clients such as Algeria and India which also have large territories and maritime domains to cover. One new feature of the Su-57 which has received relatively little attention is the Directional Infrared Countermeasures System (DIRCM), which uses turrets capable of firing laser beams to blind incoming missiles after they are detected by the fighter’s missile launch detector apertures. DIRCM turrets are mounted both dorsally behind the fighter’s cockpit and ventrally beneath it, and are unique to the Su-57 with no other fighter in the world using them. Russia’s armed forces have previously deployed DIRCM on larger helicopters, although these have been less compact compared to those seen on the Su-57. Laser beams are particularly useful against infrared guided missiles, allowing the Su-57 to more effectively counter attacks at close ranges by enemy fighters using missiles such as the American AIM-9X and British AIM-132. With man portable air defences such as those widely used against the Russian Air Force in Ukraine and Syria also relying on infrared guidance, laser defences may allow the Su-57 to provide close air support far more effectively than other Russian aircraft and complement the fighter’s stealth capabilities and reduced radar cross section and infrared signature. 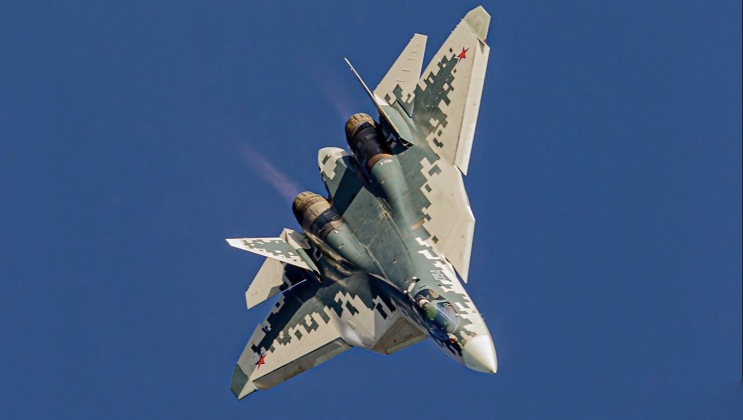 Russian combat aircraft have led the world in manoeuvrability by a considerably margin since 1982, when the MiG-29 medium weight fighter entered service closely followed by the heavier Su-27 three years later. Building on their successes, the Su-27M and Su-37 fighters developed in the 1990s based on the Su-27 had extreme levels of manoeuvrability facilitated by thrust vectoring engines, although neither entered serial production due to a lack of funds. The Su-30MKI developed for India and entering service from 2002 was the first serial production fighter with thrust vectoring engines. It was followed by the Su-35 12 years later that had significantly more thrust provided by AL-41 powerplants as well as three dimensional thrust vectoring. The Su-35 built on the successes of the cancelled Su-37 and Su-27M and was also derived from the Su-27. The Su-57 has further built on these advances, and not only has a far better thrust to weight ratio due to the power of its Saturn 30 engines, but also an airframe designed to be more manoeuvrable than its predecessors capitalising on advances in airframe design. This allows the aircraft to better evade missile attacks at high speed, and better position itself in a low speed dogfight. Paired with its complementary ability to blind heat seeking missiles at close ranges, this makes the Su-57 particularly dangerous in combat situations that do not involve beyond visual range missiles. Particularly from the 1980s Russian fighters have placed a strong emphasis on the ability to operate with minimal maintenance and from very austere and makeshift airfields. This was perhaps epitomised by the MiG-29 and Yak-41 fighters which could deploy with negligible runway support compared to other fighters particularly those in the West. The Su-57 has improved considerably on the runway performance of its predecessors, and is capable of taking off from very short distances which was highlighted as potentially making it well suited to aircraft carrier operations with minimal adaptation. The fighter notably uses mudguards, heavy duty landing gear and large tires and was designed to deploy from makeshift airfields which even much lighter Western fighters would struggle to utilise. This is particularly useful as the ability of major powers to launch large scale strikes on enemy airbases is expected to only grow with time, a notably example being the development of the AGM-183A hypersonic missile in the United States which would place Russian airfields at serious risk in the opening stages of a war. Following the entry into service of the Kh-47M2 Mach 10 ballistic missile in late 2017, plans to develop a miniaturised variant for integration onto the Su-57 were announced near the end of 2018 which would make it the only fighter in the world capable of delivering hypersonic ballistic missile strikes. The missile was considered ideal for anti shipping missions and precision strikes against command centres, logistics hubs, airfields and other critical targets deep behind enemy lines. Its high manoeuvrability and precision, combined with its speed, made the missile extremely difficult to intercept and allowed it to neutralise most warships with a single well placed hit due to its kinetic energy upon impact. It remains uncertain whether the miniaturised version will retain the original’s 2000km engagement range, and whether it will also be capable of carrying nuclear warheads.

The Su-57’s already high endurance and stealth capabilities, when paired with such a weapon, would make it a strike platform with few if any rivals worldwide. Integrating the missile onto the fighter represents an effort to capitalise on a key field of Russian technological leadership – hypersonic weapons – to enhance the capabilities of its fighter and partially compensate for deficiencies in other areas such as stealth. The fact that the Su-57 is a frontline fighter set to be very widely deployed, with over 200 expected to be operational by the late 2030s, makes its ability to deliver ballistic missile strikes particularly concerning for potential adversaries, with the damage a single squadron equipped for strike missions could do being very significant. If offered for export the missile is likely to significantly improve the Su-57’s attractiveness, and its anti ship capabilities could lead to greater interest in the fighter from the Russian Navy which currently relies on the Su-24 and Su-30SM fighters for maritime strike roles.