Following reports in March that the Russian Air Force had deployed Su-57 fifth generation fighters to support military operations in Ukraine, which were confirmed in May by insiders speaking to state media outlets, reports from Russian media outlets in early June have indicated that the aircraft’s new mission has been suppression of Ukrainian air defence systems. “The Russian Aerospace Forces conducted an operation to identify and destroy Ukrainian air defence systems using a flight of four newer Su-57 multirole fighters . The aircraft were combined in an information network through automatic communication, data transmission, navigation and real-time identification systems,” a source closet to the operating told Russian news outlet RIA Novosti. “Combining aircraft in a single information space increases the efficiency of identifying and hitting targets,” he added, noting that the operation served to confirm the low signature of the fighter’s sensor suite. 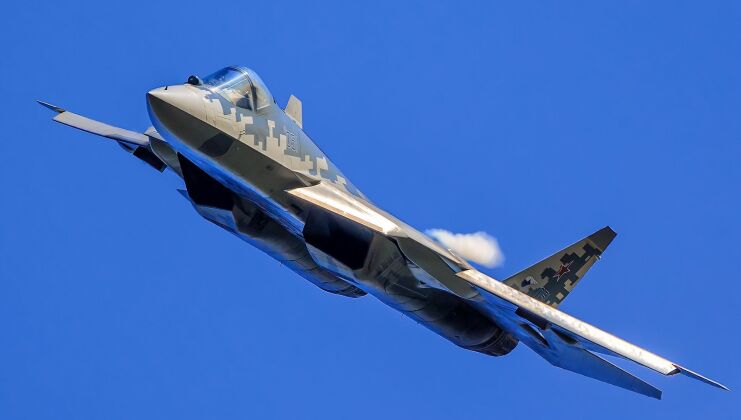 The Su-57 is well optimised to air defence suppression mission, with its stealth capabilities and laser defences making it difficult to target by radar and inferred guided weapons respectively. Although fighter’s radar cross section is relatively high for a fifth generation fighter, the aircraft compensates with strengths in other capabilities. The Su-57 uses six electronically scanned array radars which operate in different wave bands, providing not only tremendous situational awareness and the ability to track up to 60 targets simultaneously, but also wide ranging options for electronic warfare ideal for air defence suppression even against much more modern systems than those in Ukrainian hands. The aircraft’s Himalayas electronic warfare system, distributed across the airframe, is further considered well up to the task of blinding Ukraine’s Soviet era ground radars. Prior reports on Su-57 deployments indicate that they have struck from beyond the range of Ukrainian air defences to engage with standoff weapons such as the Kh-59MK2 cruise missile. Anti radiation missiles such as the Kh-58UShKE, an improved derivative of the Russian Air Force’s widely used weapon, may well also have been deployed, although the possibility also remains of the Su-57 suppressing Ukrainian defences using non kinetic means alone. Even if deployed within the range of Ukraine’s S-300, which are by far the country’ longest ranged anti aircraft systems, the age of the systems, their electronic warfare countermeasures and their sensors means the threat to the Su-57 will remain low. Ukrainian S-300 variants all date back to the 1980s and are considered obsolete, with the main challenge to Russian aircraft even much older non stealth designs being from short ranged handheld missile systems such as the Igla and Stinger systems which compensate for a lack of range or sophistication with tremendous numbers and ease of concealment as they leave no radar signatures. Deployment of the Su-57 to Ukraine not only provides an opportunity to support the Russian war effort with a formidable asset, but also to prepare the fighter for a wider adoption by the Russian Air Force faster through combat testing and to increase foreign interest in the design. The Su-57 remains the only fighter of its generation to have launched beyond visual range attacks in combat, and is the only heavyweight fifth generation fighter confirmed to be capable of deploying cruise or anti radiation missiles.