The Chinese People’s Liberation Army (PLA) Navy has deployed Russian supplied Ka-31 airborne early warning helicopters from its Type 075 Class assault carriers, as the capabilities of the new warships continue to be expanded. A Ka-31 was seen on the carrier Guangxi, which was the second Type 075 class ship to enter service. Three warships of the class are currently operational, which provide an equivalent to the U.S. Navy’s Wasp Class and America Class ships. The Ka-31 is also relied on to provide greater situational awareness for the Navy’s two aircraft carriers the Liaoning and Shandong, but its deployment from much smaller Type 075 Class carriers has increased existing speculation that the ships could eventually deploy fixed wing aircraft with vertical landing capabilities. 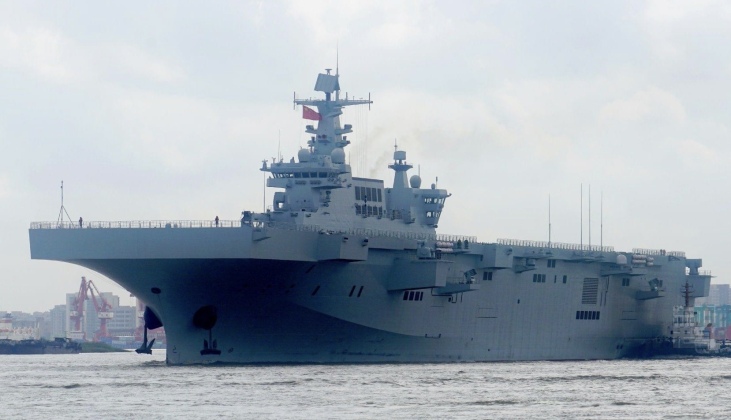 The Ka-31 first became operational in 1995 when it was integrated into the air wing of the Russian aircraft carrier Admiral Kuznetsov, although limited Russian carrier operations means it is primarily used by the navies of China and India the latter which purchased a carrier and carrier based fighters from Russia. Although the Chinese carrier program is considered far ahead of that of Russia, and the country is set to field a fixed wing airborne early warning aircraft the KJ-600 from its upcoming supercarriers, rotary wing aviation is one area where Russia is seen to maintain a lead. Chinese interest in the Ka-31 was first reported in 2013, after the Indian Navy had placed multiple orders from 1999. Variants in Chinese service are the most advanced, having incorporated significant improvements to their avionics over prior models. As the aircraft is based on the Ka-27 airframe that is in production for use in close to 20 countries, there was little issue  with restarting production to meet Chinese orders.

While elevated sensors remain invaluable to carrier operations, helicopters’ more limited endurances and the much smaller radars they are able to carry means fixed wing AEW aircraft have been preferred by navies which can operate them. Only carriers with catapult launch systems such as the American Nimitz Class and Chinese Type 003 Class (previously identified as the Type 002) have accommodated fixed wing AEW aircraft.