Fifth generation fighters with advanced stealth capabilities are seen to provide units which field them with tremendous advantages over older fourth generation aircraft, although only two countries China and the United States have been able to develop such fighters to a stage where they are ready for deployment. The Chinese J-20 and American F-35 both entered service in the mid 2010s, and are currently the only aircraft of their generation that are both in production and fielded at squadron level strength. The J-20 is seen to pose by far the greatest challenge to American air superiority of any fighter in the world, and has seen its capabilities improve rapidly since first delivered to the Chinese People’s Liberation Army Air Force in 2016. The latest variants introduced from 2021 gained a supercruise capability which the F-35 notably lacks – the ability to fly supersonically for sustained periods without using afterburners. Developments in the J-20 program have led the U.S. Air Force to prioritise training against fifth generation targets, for which the service’s own stealth fighters have played an increasingly central role. One result was the reestablishment of the 65th Aggressor Squadron equipped with F-35s on June 9, 2022, specifically to simulate the capabilities of Chinese stealth fighters and prepare the Air Force accordingly. 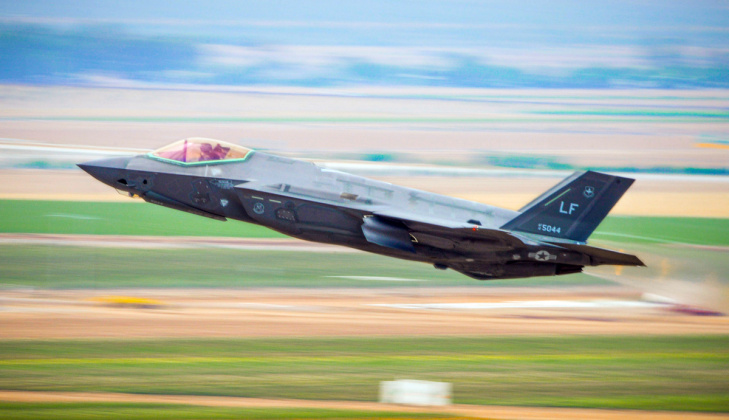 Elaborating on the rationale for forming the new aggressor unit, Air Combat Command chief General Mark Kelly stated: “Due to the growing threat posed by PRC [People’s Republic of China] fifth- and sixth-gen fighter development, we must use a portion of our daily fifth generation aircraft today at Langley, Elmendorf, Hill, Eielson, and now Nellis, to replicate adversary fifth-generation capabilities. Precisely because we have this credible threat, when we do replicate a fifth-gen adversary, it has to be done professionally. That’s the aggressors.” Commander of the 57th Operations Group Colonel Scott Mills further elaborated: Aggressors themselves represent a huge conglomeration of subject matter experts that focus mostly on Russia and China. The 65th will focus on China, and we’re talking about doctrine, their training, and their capabilities, so that when [the 65th is] flying, we are actually modeling the pacing challenge as closely as we can. Using the F-35 as an aggressor allows pilots to train against low-observable threats similar to what adversaries are developing.” “We made the decision that we had to focus on that high-end capability. The decision was made to focus on the high-end fight at Nellis; the only aircraft capable of replicating a peer adversary is the F-35,” Mills added. Chinese development of sixth generation fighters had been another area of key concern in the United States, with the two having no peer level competitors in development, meaning this may be a capability the 65th eventually needs to simulate. The possibility has repeatedly been raised that China could be the first in the world to have a sixth generation fighter operational. The F-35s used by the 65th Aggressor Squadron are early production models which, although far more expensive than those in production today, have been too problematic to bring into service and are never expected to be coded for combat. Use of stealth fighters to simulate the capabilities of enemy fifth generation jets is hardly unique to the U.S. Air Force, with J-20s having been deployed under all theatre commands in China and providing fourth generation units with valuable experience in countering such targets. Although both come from the same generation, the two aircraft are very different. The J-20 is a heavyweight twin engine aircraft designed for air superiority missions, while the F-35 is a much lighter single engine jet developed primarily for air to ground operations.

Although other fifth generation fighters are under development in China and Russia, the F-35 and J-20 are expected to be fielded in much greater numbers than their rivals and today have avionics considered in a league of their on in terms of sophistication. The two fighters had their first encounter confirmed in March 2022, which took place over the East China Sea and saw U.S. Air Force officials express admiration for the J-20 program and the fighter’s capabilities. The J-20 entered full scale mass production in December 2021, although the F-35 has yet to be approved for full scale production by the Pentagon due to ongoing performance issues and has instead seen orders for 2023 cut by over one third.