Beginning development from the late 1970s, fifth generation fighter aircraft remain few and far between in the world today with only three classes currently in production worldwide. These include the Chinese J-20, the American F-35, and the Russian Su-57. With the J-20 being delivered to the Chinese Air Force around 2016 approximately five years ahead of Western analysts’ expectations, its service entry closely coincided with that of the F-35 into the U.S. Air Force while the Su-57, initially scheduled to become operational in 2015, has yet to see a full squadron formed due to considerable delays in the program. All three fighter classes are expected to remain in serial production for at least a decade more, although other than the Chinese carrier based fighter based on the FC-31 program it remains highly uncertain whether any other aircraft from the fifth generation will become active anywhere in the world. Although coming from the same generation the J-20, F-35 and Su-57 are all very different aircraft which reflect the strengths of their respective defence sectors, and were each designed with different primary roles in mind. A comparison of the three classes and their capabilities provides important insights in to the balance of power in the air and how it may evolve in the coming decades. The only fifth generation fighter developed outside the United States and fielded at squadron level strength, the success of the J-20 program is a result of China’s emergence both as the world’s largest economy from 2014 (by IMF and CIA counts) and as the world’s leader in a fast growing number of areas of research and development. The aircraft is increasingly widely considered the most capable in the world in terms of its air to air performance as its capabilities continue to be improved rapidly, most recently with the development of the J-20A variant with improved stealth and a supercruise capability – the latter provided by new WS-10C engines. The fighter’s avionics are considered on par with its American rival the F-35, although unlike the F-35 its airframe was designed primarily for air to air combat rather than air to ground missions which is reflected in its twin engine configuration, larger payload for air to air missiles, and far superior flight performance as well as its larger sensor suite. U.S. Air Force officials confirmed the J-20’s first encounter with the F-35 in March 2022, which is the first ever between opposing fighters of the new generation, and expressed a degree of admiration for the Chinese fighter and its program. The J-20 is increasingly expected to form the backbone of China’s fleet of heavyweight fighters with the aircraft entering full scale production in late 2021 and having already been entering service at a rapid rate before then. 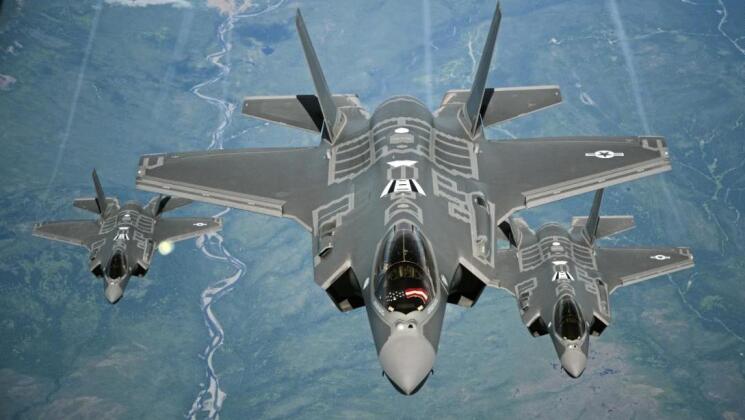 The F-35 is the lightest fighter of its generation to be developed, and has a much smaller weapons payload than its competitors while using only a single engine. The aircraft was designed as a lighter and cheaper counterpart to the F-22 which, due to a range of issues particularly centring around maintenance needs and operational costs, saw production terminated less than four years after entering service. The F-35 is unable to supercruise and has a very low speed, low manoeuvrability and low altitude ceiling. It nevertheless benefits from advanced stealth and electronic warfare capabilities and, unlike the F-22, has deep bomb bays allowing it to carry cruise missiles, heavy bombs and even nuclear warheads. As implied by the name of the program to develop the aircraft, the Joint Strike Fighter, the F-35 was designed primarily for operations other than air superiority although it retains a defensive air to air capability. The fighter was designed to be inexpensive and produced in very large numbers, and among Western fighters is effectively unrivalled in terms of cost effectiveness in production although its operational costs remain far higher than initially budgeted which is an outstanding issue. Unlike the J-20, the F-35 has yet to be certified for full scale production due to ongoing performance issues, and is still considered several years away from becoming fully operational. Developed as a successor to the Soviet MiG 1.42 program which lost momentum during the economic turmoil of the 1990s, the Su-57 was intended to form the backbone of the Russian Air Force by the mid 2020s with ongoing economic issues and limitations of the post-Soviet Russian industrial base preventing this from materialising. While during the 1980s the Soviet Union was expected to lead in the fifth generation of fighter aviation much as its fourth generation fighters were generally seen as having an edge over rivals, the state’s collapse left Russia with a far weaker economy and much smaller scale of research and development to pursue this. The Su-57 is nevertheless a potentially promising fighter and outside China and the United States remains unrivalled. Although less stealthy than its foreign counterparts, the fighter’s long range air to air missiles have strong advantages over foreign competitors. Its sensor suite remains entirely unique built around an infrared sensor and no less than six electronically scanned array radars operating in different wavebands – while the F-35 and J-20 use just one each. The fighter’s manoeuvrability is unrivalled, although unlike the more specialised F-35 and J-20 the Russian jet was designed to be equally capable in both air to air and strike roles and deploys a very wide range of cruise missiles and guided bombs. Where China and the Untied States are expected to begin to field sixth generation fighters close to 2030, Russia is likely to continue to rely on the Su-57 and enhance the aircraft with sixth generation technologies as prospects for a viable sixth generation fighter entering service on such a timescale remain slim.