The Russian Military has employed the TOS-1A 220mm rocket artillery system for large scale bombardments of Ukrainian forces in the eastern Donbas region. The weapons systems have long been expected to play a greater role in the conflict with the potential to speed up Russian advances considerably. The TOS-1A is outstanding among Russian artillery assets, and is deployed under the Nuclear, Biological and Chemical Protection Troops rather than the Russian Army due to its special status and use of thermobaric warheads. Its rounds disperse gaseous clouds of chemicals into the air which are then detonated by vacuum explosives to release high pressure shock waves, sucking air out out of confined areas with tremendous force and destroying buildings, trenches, caves and other fortifications. The system is particularly prized for its ability to neutralise infantry in well fortified positions such as those in Ukraine, and ruptures the lungs of victims in the vicinity of each impact. Each BM-1 launcher carries 24 rounds, which have been dubbed ‘flamethrowers’ due to their ability to clear out fortifications. 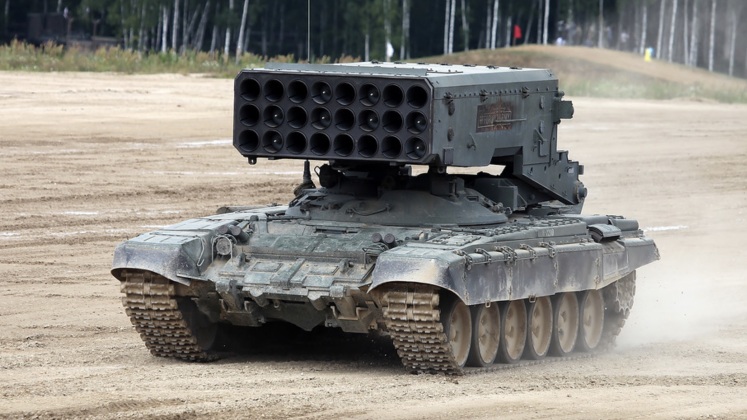 The TOS-1A was widely used by Russian and Syrian forces for counterinsurgency operations from 2016 against Al Qaeda, the Islamic State and other non state militant groups, but was first used in combat on a smaller scale in October 2014 by the Iraqi Army against Islamic State forces. It was also used on a small scale by Azerbaijan’s armed forces in September 2020 against Armenian ground units. The system’s use in Ukraine was well publicised when video footage was published of its employment in the Russian majority Donbas regions where large shockwaves could be seen caused by thermobaric explosions. The TOS-1A is considered one of the most unique weapons in the Russian inventory, and is based on the Soviet TOS-1 that entered service in the 1980s. The newer variant entered service from 2003 with an extended range and superior ballistic computer, and was further modernised in 2020 to extend its range by 66 percent. Each BM-1 launcher is mounted on the chassis of the T-72 tank, which forms the large majority of Russian tank units and thus simplifies maintenance requirements. It remains to be seen whether the TOS-1A can significantly influence the balance of power on the ground in Ukraine, but with Ukraine and its allies having no comparable weapons systems it does provide Russian forces with an important advantage to support advances on land.