On May 24 China and Russia concluded a joint 13 hour bomber patrol in the Pacific, which was the latest of several carried out over four consecutive years beginning in July 2019. It was described by Chinese state media outlet the Global Times as demonstrating “a high level of military cooperation between the two major powers that contributes to peace and stability in the region and the world at a time when both countries are facing stern, provocative pressure from the U.S. and the West.” The patrol coincided with a visit by United States President Joe Biden to the region widely seen to be aimed at rallying potential partners for a collective hard line against Beijing. Bombers involved included Chinese H-6K and Russian Tu-95MS platforms, with Russian Su-30SM fighters also having been involved. Japan notably scrambled fighters during the patrol, with the Defence Ministry in Tokyo identifying four H-6 bombers, two Tu-95 bombers and a Russian Il-20 reconnaissance aircraft in the Sea of Japan. The Chinese People’s Liberation Army Navy has maintained a strong presence in Northeast Asia near American bases in Japan including deployment of the aircraft carrier Liaoning for exercises earlier in the month and more recently the transit of two Type 054A frigates through the Tsushima Strait. 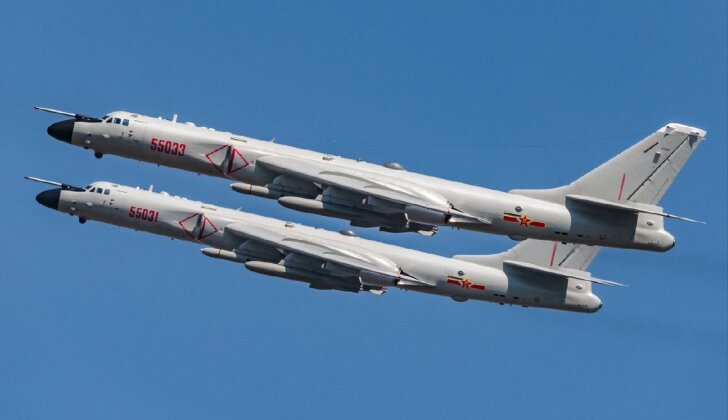 China currently fields the world’s largest bomber fleet with an estimated 270 H-6 bombers n service, and is developing an intercontinental range successor under the H-20 program. Unlike the Russian Tu-95 and its successor currently in production the Tu-160, the H-6 is not an intercontinental range aircraft and as such could not remain in the air for 13 hours. New H-6 variants are nevertheless unmatched in their ease of maintenance, low operational costs, and the sophistication of their electronics and armaments. Russia has notably seen its security interests benefit considerably from China’s rise to become a leading military power, a notable example being the Russian Air Force’s redeployment of Su-35 fighters and S-400 air defence systems from its Far Eastern regions to Eastern Europe shortly preceding the initiation of a military campaign against Ukraine in February. The rapid growth in Chinese military strength has reduced the burden on Russian forces in Northeast Asia, which were previously isolated particularly as defence ties with North Korea deteriorated when the Cold War ended.