Entering service from December 2020, only five Su-57 next generation fighters are currently though to be in service in the Russian Air Force out of a total order of 76 fighters ordered in the summer of 2019. As the first Russian fighter to become operational which is not based on a Soviet-era design, the aircraft is expected to be produced in the hundreds with production accelerated after the current State Armaments Plan ends in 2027. Production numbers from 2025-27 are scheduled to be around 14 fighters per year. With the aircraft forming the foundation for Russia’s next generation of tactical manned combat aviation, a number of ambitious programs to modernise the Su-57 are expected to drastically improve its performance over the early production variants and potentially allow it to compete at a sixth generation level to counter future Western jets being developed under programs such as the F-X. While Su-57s produced after the year 2025 will be of the improved ‘Su-57M’ variant, it remains uncertain which of new features currently under development will set it apart from preceding models. Five of the most notable next generation features expected for the Su-57 are explored below: 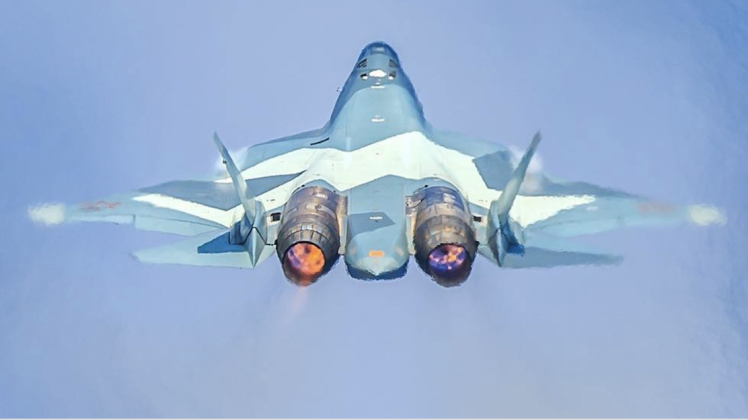 The Su-57 is reported set to receive a next generation engine, the Saturn 30, by the end of 2022 meaning that numbers using the older AL-41 engine which powers current models could be less than half a dozen. Delays in entering the Su-57 into mass production have in part represented an effort to minimise the numbers commissioned with the older AL-41 engine, with the Saturn 30 expected to provide the fighter with more thrust than any other fighter in the world following multiple reports that it would comfortably surpass the power of the F119 engine powering the American F-22 Raptor. The new engine will reportedly not only be more powerful than the AL-41, which is already the leader in thrust among pre-fifth generation designs, but it will also be considerably easier to maintain and more fuel efficient providing both a higher availability rate and a higher endurance. It will also reportedly allow the Su-57 to fly supersonically at mach 1.6 speeds without using afterburners, and possibly even at over Mach 2. While Russian official sources have claimed that the Saturn 30 will be the world’s most powerful fighter engine, however, this remains highly questionable with the F135 powering the single engine F-35 producing 33% more thrust than the AL-41 and representing a much greater challenge for the new Russian design to surpass. The Chinese WS-15 engine, which first flew on a fighter in January 2022, is also a leading challenger for this title. 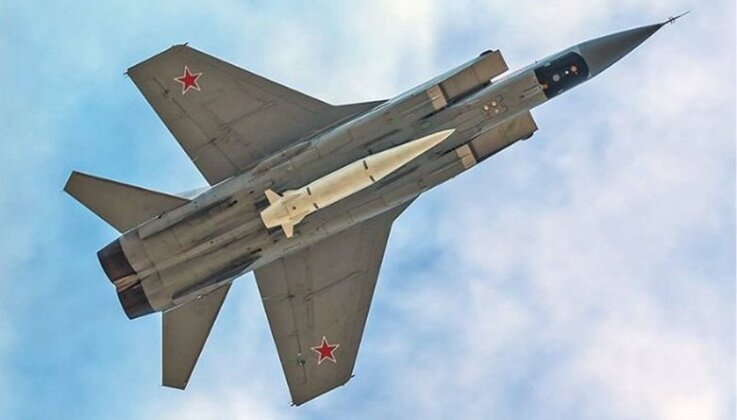 In 2019 it was announced that a miniaturised derivative of the Kh-47M2 hypersonic ballistic missile was under development to equip the Su-57 fighter. This was followed by reports in 2020 that the missile had reached prototype stage, and subsequently in early 2021 that the first production Su-57 would be assigned to testing a hypersonic weapon which was assumed to be the Kh-47M2 derivative. The Kh-47M2 entered service in late 2017, and equips the MiG-31K Foxhound strike platform providing an engagement range of 2000km, high precision against both ships and ground targets, high manoeuvrability, and a Mach 10 speed. The Su-57’s derivative of this missile is expected to have a shorter range, although it remains uncertain whether its will accommodated in the fighter’s international weapons bays to preserve stealth or whether it will be carried externally. With the Su-57 having a considerably higher endurance than the MiG-31, as well as stealth capabilities, these features could more than compensate for the missile’s more limited range. Such missiles will make the Su-57 comfortably the world’s leader among fifth generation fighters in terms of strike capabilities, and can also provide a nuclear strike capability. 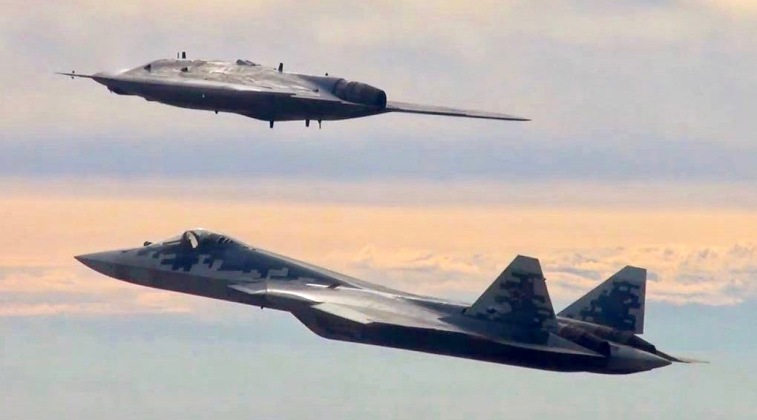 While Russia’s first fighter with an advanced artificial intelligence assistance was the MiG-35, which entered serve in 2019, the Su-57 is expected to integrate the most sophisticated forms of artificial intelligence assistants available following the trend among sixth generation fighters. These could go beyond providing prompts and advise to fully replacing the weapons systems officer usually accommodated in the second seat of twin seat fighters, engaging ground targets while the pilot takes care of flying and air to air engagements or vice versa. Although Russia’s AI development is considerably behind China and the United States, which are the current world leaders, cooperation with China could facilitate faster development. With twin seat Su-57 variants reported to currently be under development, and expected to be allocated command and control roles for accompanying unmanned aircraft, AIs could support the drone controller in the second seat and ensure optimal distribution of targeting data to both the officer and the accompanying UAVs. The Su-57 is itself expected to be able to fly unmanned missions in future, which will could have significant benefits for its flight performance allowing it to manoeuvre beyond the limits a human pilot can endure. 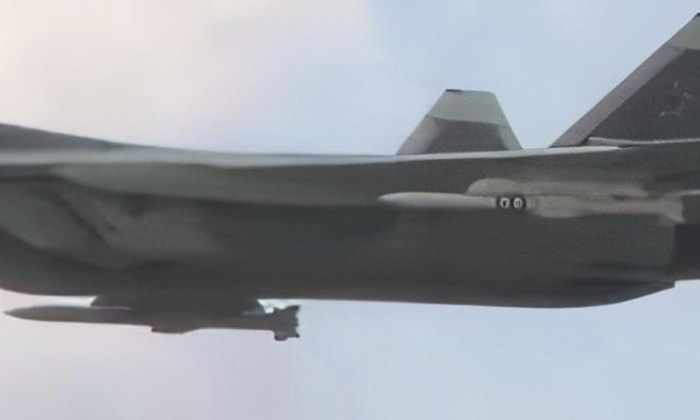 The active radar guided R-77 and older semi active radar guided R-27 are currently relied on by all Russian fighters for air to air combat, with the R-77-1 with a 110km range having made its debut in 2015 when it was deployed to Syria to equip Su-35S heavyweight fighters at a time of high tensions with NATO in the region. The missile had only entered service that year despite initially having been slated for entry into service in the 1990s. While formidable, the R-77 is considered much less potent compared to its American and Chinese rivals the AIM-120D and PL-15, and Russia has since developed the K-77M to bridge the performance gap. The new missile has an estimated engagement range of 200km, between that of the Chinese PL-15, at 200-300km and the American AIM-120D at 160-180km, but benefits from integration of an AESA radar previously only used by Chinese and Japanese air to air missiles. With cropped wings to fit inside the Su-57’s weapons bays, the missile’s most notable feature is its use of a nose mounted active phased array antenna (APAA) guidance system which overcomes the traditional “field of view” problem of missile radars making it almost impossible to evade by enemy aircraft. This is expected to provide a considerably longer ‘no escape range’ and allow it to threaten even small manoeuvrable targets at ranges of over 150km. The missile is expected to enter service before 2025, and is complemented by the R-37M which although lacking APAA guidance benefits from a higher Mach 6 speed and a longer 400km engagement range and a much larger 60kg payload.. The R-37’s greater size, however, means that fewer can be carried by each aircraft. 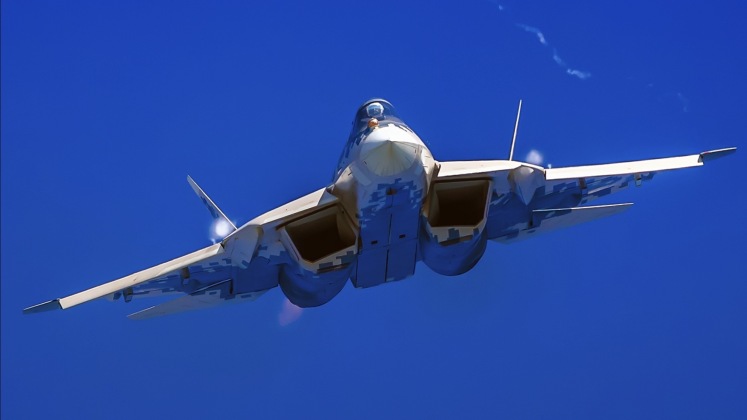 The Su-57’s airframe integrates several missile launch detector apertures providing warning of potential enemy missile attacks. An entirely unique feature which complements this is the use of laser turrets that can blind incoming missiles. This feature may be fully operational on current Su-57s, but is expected to be further refined in future as the aircraft moves beyond a limited initial operating capability. Turrets are mounted dorsally behind and ventrally under the fighter’s cockpit, and are considered particularly effective against infra red guided missiles such as the AIM-9X launched by American fighters or the 9K32 Strela-2 surface to air missile system. With infra red guided missiles being a primary armament for visual range air to air combat, development of this system reflects Russian aviation’s general emphasis on the importance of short range capabilities due to the likelihood that countermeasures against long range missiles in a major war would make close range dogfights inevitable. No other fighter is known to have a similar defensive suite under development.

Beyond laser defences, the Su-57 is also set to integrate directed energy weapons and possibly lasers as well which have been confirmed as under development for it and for the lighter MiG-35. These will potentially replace its main cannon, and provide a more precise way of engaging fast moving targets such as enemy missiles and aircraft during flight. Directed energy weapons are currently being developed by rival military industrial powers with the U.S. and Chinese programs reported to be in particular advanced stages, although such systems are only expected to become effective in miniaturised form suitable for fighter plans closer to the year 2030.