On April 26 the first footage emerged confirming that Russian T-90M battle tanks were beyond the country’s borders in Ukraine, marking a potentially major development and providing a significant improvement over the capabilities of all prior Russian tanks used in the conflict. Aside from the next generation T-14 tank which is currently in limited service, the T-90M is considered by far the most capable tank in the Russian Army and is technologically well over a decade ahead of any other tank in the country’s arsenal. With only around 100 in service, having begun to join the Army only in early 2020, the tanks’ absence from the frontlines in Ukraine was long seen to indicate that Russia was holding the vehicles back and confident in the capabilities of older platforms such as the T-72B3M to achieve its objectives in the campaign. The T-72B3 and B3M currently form the backbone of the Russian Army’s tank units with an estimated 850 and 550 of each in service respectively, and while overwhelmingly superior to Ukraine’s own obsolete T-64 and T-72A tanks a number of reports have indicated that the Russian vehicles have taken significant losses to the large volume of fire coming from U.S.-supplied Javelin anti-tank missiles widely used by Ukrainian infantry. Although envisioned as a cheaper counterpart to the T-14, T-90M’s survivability, situational awareness, mobility and firepower are all very far superior to those of other Russian Tanks. The Russian Army reportedly intends to eventually field around 600 T-90M tanks, upgrading 400 older T-90As to this standard while building up to 200 more. While several thousand T-90 tanks have been produced by Russia, these have almost all been exported to clients across the world from Vietnam and Turkmenistan to India, Algeria and Uganda, with the tank in recent years produced in larger numbers than all Western tank designs combined. Should reports on the underperformance of the T-72B3/B3M be correct, Russia may well accelerate T-90M production and possibly even T-14 acquisitions to field more units capable of fighting on more modern battlefields. Other sources have indicated, however, that the T-72B3’s performance has been more than adequate, but that Russian tactics have at times been questionable or else that reports of high losses are a result of Western or Ukrainian disinformation. The actual status of Russian tank forces in Ukraine and their performance remains highly uncertain. 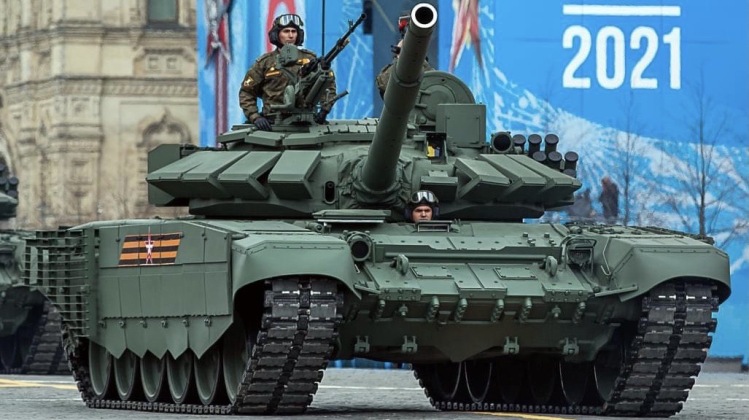 The T-90M’s significant advantages over older Russian designs include integration of the new 2A46M-5 125mm smoothbore gun, access to the 3BM-69/70 round with an 800-900mm penetration among other new munition types, and use of new fire controls including thermal imaging systems for both gunners and commanders. The tanks’ survivability is improved with new variants of the Relikt explosive reactive armour and the Afghanit active protection system, a more powerful engine, and extra armour for internally stored munitions. The tank’s deployment may well be intended to test its performance under battlefield circumstances, but could also signify that the Russian Military is determined to secure a particular objective which is seen as important enough that its most capable armoured units can be spared from the defence of Russian territory itself. The deployment could have very significant consequences, opening the possibility that the tank could be captured and studied in the West, could prove highly survivable against Western anti tank weapons, or could prove highly vulnerable to such weapons which may spur investment by Russia in the T-14 or in further improving the T-90’s armour.