The Chinese People’s Liberation Army (PLA) Navy has released footage of a test launch of a hypersonic ship launched ballistic missile integrated onto a Type 055 Class destroyer. Reportedly designated YJ-21, the missile can be accommodated in the vertical launch cells of the ships which currently deploy the YJ-18 and YJ-100 missiles for anti shipping and land attack roles respectively as well as three kinds of missile for air defence. Eight Type 055 Class destroyers have been built for the PLA Navy, with the ships carrying larger armaments than any of their Western rivals and, with the exception of the three American Zumwalt Class ships, having superior stealth capabilities. A 2020 report by the British defence think tank IISS highlighted that the ship represented “a step change in PLAN [PLA Navy] abilities to mount independent long-range deployments or task-group operations,” and “may be the most capable multi-role surface combatant currently at sea.” The ship class was that long expected to be prioritised for receipt of key next-generation technologies, including the world’s first ship launched hypersonic ballistic missile as well as in future electromagnetic rail guns and laser defence systems. Hypersonic weapons development was previously pioneered by Russia, which unveiled a number of new designs in March 2018, although China has since increasingly taken a lead with the world’s first ground-based tactical hypersonic glide vehicle, an intercontinental range glide vehicle exceeding the performance of its Russian counterpart, and the world’s only hypersonic aircraft. Hypersonic missiles have long been seen to offer surface warships key performance advantages, allowing them to effectively evade enemy air defences, engage at longer ranges, and strike with more kinetic energy. With even Mach 3 cruise missiles such as the YJ-18 or the Russian-Indian BrahMos considered capable of disabling large surface combatants with a single impact, the Mach 5 or higher speeds of a hypersonic missile would be considerably more damaging still and potentially forgo the need for a warhead entirely. The Russian Navy currently fields a ship based cruise missile, the Zicron, with a Mach 9 speed and a range approaching 1000km. The country nevertheless lacks modern post-1980s surface destroyers forcing it to integrate the munitions onto older ships or lighter frigate and corvette sized vessels. The United States is also developing a hypersonic ship launched cruise missile under the Conventional Prompt Strike program, which is seen seen as a competitor to the Zicron. 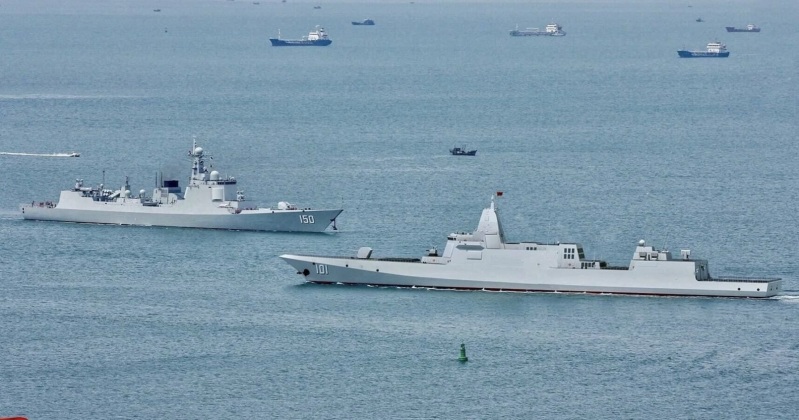 The new test of a ship launched ballistic missile follows reports in January 2022 that China would resume production of the Type 055 Class after a brief pause, although it has long been speculated what kind of warship could succeed it in production. The ship class uses a dual band radar systems similar to those the U.S. Navy had intended but failed to integrate onto its Zumwalt Class destroyers, providing a situational awareness advantage over Western, Japanese and Russian ships which lack comparable sensors. This makes the Type 055 a potentially ideal platform to deploy very long ranged new missiles. Missiles compatible with the destroyer can also be integrated into the vertical launch systems of the smaller Type 052D Class destroyers which are being built in parallel, and of which 20 are now thought to be in service. The Type 052D benefits from many of the same technologies but integrates only 64 launch cells. With the two destroyer classes expected to work in joint groups, Type 052D Class ships can potentially use targeting data from the Type 055’s sensors, as well as from a range of other PLA assets such as KJ-500 airborne early warning aircraft, to provide targeting data for the new missile. The characteristics of the new missile including its speed and range remain uncertain, but if successfully completing development it is likely many similar missiles will be seen integrated onto other Chinese weapons platforms such as Type 96 Class submarines and H-6 bombers. The capabilities of such a missile are potentially key to allowing the Chinese fleet to counter the more numerous surface fleet of the United States which currently lacks any comparable anti ship capabilities.